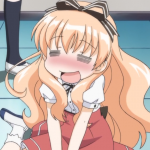 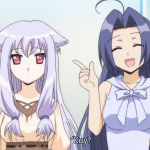 END_OF_DOCUMENT_TOKEN_TO_BE_REPLACED

This week in anime…

August 15th, 2009
Today I shall describe some of the past week’s new anime episodes. The letters beside the title indicate the rating I give the episode. I’ll describe my elaborate rating system in a later post >_<
Princess Lover – AAA
The latest ep for PL was as odd as… the Kanamemo musical one XD Except this was kind of odd in a good, in fact, AWESOME way.
It’s, like… FMP/Fumoffu-class funniness ><
Seriously, this anime is so hilarious, they should just take out the “ecchi” genre and make it pure romantic comedy.
Bakemonogatari – A
The new story arc is kind of odd. Nothing really really awesome except the usual awesomeness.
E.g. Senjougahara being her awesome self (e.g. making death threats with writing utensils and stationary).
Hachikuji has turned out to be an even MORE awesome character XD her jabs at Araragi are fundamentally funny.
Oh my gosh, I actually remember the lead male’s name in this anime o_O that’s rare.
Oh, and Araragi’s two sisters should appear in the anime more. I mean, so far they’ve only had like 3 seconds of screen time.
Umineko no Naku Koro ni – C-
I expected this episode to be super-ultra-MEGA EPIC (due to the last episode’s preview, plus lots of online hype on blogs, etc)
It wasn’t that epic. in fact, nothing epic happened at all (besides the EPIC op sequence, but that’s always epic). Pfft. So basically, not-up-to-expectations episode (but with a lot of “Uuu” I guess)
Hayate no Gotoku – S+
This is last week’s episode (wasn’t able to watch it, so I’m watching it this week). Summary:
Nagi: “I am changing, starting today! I am the new Nagi! NAGI 360 ELITE!!”
Maria/Hayate: “ahaa…” *sweatdrop*
Sorry, I just felt like adding screenshots >_<
… and… um… Yugioh parody? Slash shameless advertisement for Hayate no Gotoku TCG (does that really exist? XD)
“That was obviously a commercial!”
Ahahaha, that was awesome. And that was just the first half.
Second half… Sakuya is awesome. (She should start making romantic advances towards Hayate ><)
ToLOVE-ru OVA 01 and 02 – SS
First of all, the ToLOVE-ru ending was pretty… yeeah XD
It really needs an actual second season… but OMG, the OVAs are beyond awesomeness — I mean, one OVA is probably worth like 10 episodes.
In OVA 1, another one of Lala’s malfunctioning machines turns Rito into a girl… and awkward, hilarious situations ensue.
OVA 2 is about the cutest character in ToLOVE-ru — Rito’s little sister, Mikan. This is probably what made me laugh the most this week.
I like the little things that changed from the anime to the OVA (such as giving that minor girl-spirit a major(er) role, and GIVING MIKAN MORE SCREEN TIME). I also love how pretty much every main character has at least a cameo in each OVA.
Sora no Manimani – B+
The usual hilarity. Fuumin (the student council president + literature club president + really mean and ugly person) is really mean and ugly. Of course, it’s nice how Lead Male and Fumin have some sort of mutal understnading.
Oh, the astronomy club president is weird o_O he isn’t really funny, nor is he cool, nor is he smart or anything… he just sits there, looks creepy/ugly, and throws up/spews blood spontaneously (yeah…… I know… ><)
I liked how the characters described the beauty of stars, of the night and the sky. It makes me want to run off to some mountain, lie down, and gaze at the stars the entire night.
Umi Monoagatari – no comment
… somebody kill me… *eyes and ears bleed*
Saki – S+
OOOOOOOOOOOMMMMMMMMMMMMMMMMGGGGGGGGGGGGGGGGGGG
The twenty-episode-long epic mahjong match is FINALLY over XD
They could have made Saki’s final move even more epic (I would imagine, like, making Haramura-san or, even better, her nee-chan barge in at the last moment and inspire her to get like, a haiteiraoyue four-dora four concealed melds/suuankou with rinshankaihou or something ><)
But yeah… she won pretty epicly I guess. But since this battle has lasted for god-knows-how-many episodes too long, you’d think it would be epicer than this.
It was enjoyable though. The part where Saki is smiling while she is revealing her super-epic-hand-that’s-probably-harder-to-get-than-winning-the-lottery is REALLY creepy ><
Koromo was sweet, and I’m not sure whether or not I liked how Saki basically “showed her that playing mahjong could be fun”.
Of course, the yuri. I just try not to notice it (not a fan, but it’s not really repulsive).
But ohhh… next episode… it’s the typical “beach episode” that every single anime just HAS to have XD
BUT… we also FINALLY get to see Saki’s nee-chan/older sister finally, it seems! ^_^
Yes, I realize I do grade harsh on episodes (this is my first time rating individual episodes… I have all the animes I’ve ever watched in a spreadsheet with each individual part [e.g. plot, music, bgm, characters, humor, etc.] having a rating from F- to so far SS+, as well as an overall rating in the same range.)
I have never given out an SSS rating yet. I want to see the anime that deserves that.

Today I shall describe some of the past week’s new anime episodes. The letters beside the title indicate the rating I give the episode. I’ll describe my elaborate rating system in a later post >_<