I’m putting a cut on my anime posts now. I am going to split about half the episodes above the cut, half below. Oh, and this week is FINAL CONCLUDING EPISODES for most Fall 2009 animes… yes, Christmas, my B-day, and end of Fall 09, all in one week. Much too much drama.

生徒会の一存 / Seitokai no Ichizon Episode 12 FINAL — Last time: Mafuyu confesses her love; insert astonishment. Typical student council affairs, the topic shifts to everybody’s dreams for the future — what they want to become when they grow up (think Shugo Chara). Random comments ensue on how this is the last episode of Seitokai and nobody is doing anything meaningful. Suddenly a random character from Mafuyu’s BL (translation: Japanese gay male+male love manga/novel/story) shows up. Seitokai-ness ensues. After that, Sugisaki randomly goes into a meaningful dialogue about life, the meaning of strength, and makes tear-jerking references to his past and other interesting plot details that haven’t been revealed to us yet, even in the final episode. And then he finds the gang eavesdropping on him, and the delicate plot dissolves into more Seitokai no Ichizon wackiness. SS. [10/10]

Negima (original; winter 2005) — Yeah, I finished Negima, and since I included a random screenshot from Negima, I thought I might as well say something about it. Hm, it started off like Pani Poni Dash! with a male teacher who was secretly a magician, in place of Becky. Oh, and the 31 female students in his class are all in love with him. By the way, have I mentioned: Negi-sensei, aforementioned teacher, is only 10 years old? (9, if you don’t round up…)

Negima is one whacked-up anime. The ending was the most bizzare chain of events I have ever witnessed in an anime. (If you didn’t think the body of the anime wasn’t bizzare enough.) So like, randomly, in an admittingly well-done sequence beautifully displaying her inner feelings (I liked the usage of the sound of a bell), um… the lead female dies. Now of course, you expect this to be like Tengen Toppa Gurren Lagann, and Negi-sensei grows up and saves the universe and blah, right? But no… all of a sudden Negi’s students have a time travel machine… and then they travel into the past… oh, and he just happens to run into his dad, who… dies… and, um… they fight with demons… in plain sight of human civilization… and then all 31 or whatever of Negi’s students kiss him and are suddenly transformed into mahou shoujos and pwn some weird demon lord. And somehow all the conflicts are resolved… and… ugh. It was so bizzare, the bizzarity counts as entertainment, I suppose.

真・恋姫無双 / Shin Koihime Musou Episode 10 — I’ve run out of things to say. Last 3 episodes of 2nd season of Koihime Musou; I hear a 3rd season has already been announced for, what, Spring 2010?

[spoiler]Introducing… Houtou-chan, a character who is even more loli than Shuri! She is another orphan who becomes Shuri’s “little sister” in this episode. Oh, meanwhile, Ryuubi feeds Kan’u, Chouhi is jealous, etc, etc.[/spoiler]

真・恋姫無双 / Shin Koihime Musou Episode 11 — They put so much money into the artwork for this anime… if only they put as much work into the storywriting.

[spoiler]Bachou’s cousin appears. Is it just me, or is every anime this season referencing that scene from SoraOto‘s first episode? The jokes aren’t really that funny. Anymore. Somehow they make the Yellow Turban Rebellion into some weird J-pop idol group’s fanclub. This is kind of… a twist.[/spoiler]

Next episode: “The Generals Attempt to Suppress the Yellow Turban Rebellion”. I wish this was as serious as the titles make it sound.

そらのおとしもの / Sora no Otoshimono Episode 12 — I like how the writers for SoraOto always fail to explain how anything they write is relevant.

[spoiler]Is Tomoki trying to imitate Battler? Sohara is still the best female. Hm, the format of this is starting to resemble Seitokai. Oh, and we randomly go back into Serious Mode. Nymph and Tomoki actually make a pretty perfect pair. (Sohara is still better, but.) Lol, Ikaros gets jealous of Tomoki+Nymph. As for Nymph’s monologue to Ikaros… what, is she writing an analytical essay on the symbolism prevalent inside a zoo?[/spoiler]

Once again, it’s World vs. Tomoki; very well-done zoo scene. The humor is, as usual, way past excellent. I do think the moments that are supposed to be “touching” still come out as lame. Wahh, Nymph, don’t die! AAA. [8/10]

God… this episode’s outro is really good. Rating up. I’m too lazy to change it, so pretend I wrote AAA+ up there.

空の女王 / Sora no Otoshimono Episode 13 FINAL — Being the final episode, they finally decided to add kanji to the title.

Anything I say at this point won’t really mean anything, so I’ll save the overanalysis for whenever I feel like writing an overanalysis post about SoraOto.

Summary: Nymph is tricked into plotting against Ikaros. Meanwhile, everybody is preparing for the big Christmas party. Ikaros makes her love confession. The rest is so teary I’ll leave it with “WATCH THIS”.

The whole Ikaros battle is kind of like… why don’t you just use Aegis and blow up everybody within a 10km radius? Geez >_<; god, though, the animation is so amazing. The “oh we’re friends” thing with Nymph is just too cheesy, though.

Still though, the… ship… weapon… cannon… thing. Ugh, I can’t get enough of that awesome 3-D animation. (Much better than what Disney/Pixar churns out every month.) SSS. [11/10]

Wow this turned out long. ゴメン～

うみねこのなく頃に / Umineko no Naku Koro ni Episode 25 — So we finally see Ange use magic in 1998, weird Umineko-esque things happen, and um… I don’t know. It pains me how dark and real this anime is, yet unreal and fantastically horrific. It's a bit too late now to notice.

うみねこのなく頃に / Umineko no Naku Koro ni Episode 26 FINAL — Ange and Battler tearful reunion. Why is this so sweet and sorrowful. Yay, cool-and-spicy Battler is back!

Um wth is with this “fight”… what the… this isn’t even clever. … god, I’m disappointed with Umineko. D. 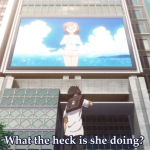 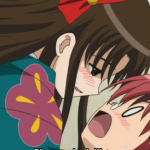 Because middle schoolers get drunk and hit on their 9-year-old teachers -all the time- in Japan. 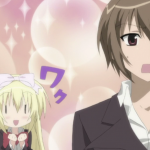 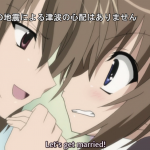 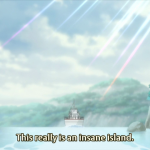 It’s a bit too late now to notice.