Again, nothing entertaining to say here.

にゃんこい / Nyan Koi Episode 11 — I really hope this anime doesn’t end. Imouto is so cute too. Nagi gets drunk on juice… ahaha, reminds me of last last time in Sora no Otoshimono when Tomo-chan and Sohara got drunk on soda.

Remind we again why a random mailwoman is in love with Junpei? XD

Hey, hey, Sumiyoshi-san, don’t spill your drink on the camera.

I like how Junpei is getting a job and working hard for money. It teaches the anime-watching teenage population good life skills.

… To Aru Majutsu no Index reference in the eyecatch. *faints* Junpei == Touma, and I am such a fan of Index by now…

From now on I will switch between calling him “Kousaka” and “Touma 2”. This episode was sweet. I don’t like Sumiyoshi, but it turned out sweet either way. BRILLIANT WAY TO END THE EPISODE. That final scene brought this from SS to SS+. [10.5/10]

NEXT EPISODE IS FINAL EPISODE? I’m going to cry…

Kampfer Episode 11 — Ugh. UGH. This has got to be the worst, most f**’d up anime this season. My eyes hurt.

I must say, the transformation animations are the only cool thing in the ENTIRE EPISODE. I already mentioned how stupid the mind-control thing was. The Sakura-san-is-secretly-evil thing too.

What the hell… as their “power level” increases, their clothing begin to peel off… o-o. Why the heck are the ugly stuffed animals singing a stupid Christmas song during the climax? What the heck is with this ending… I still have to give it a B for good animation, though. Bah. [5/10] 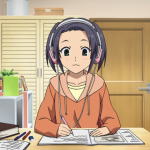 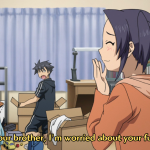 Both screenshots today were of Imouto. There’s something about her that’s exteremly screenshotable.