You are here: Home › Anime › Nogizaka Haruka no Himitsu

Originally, I planned on alternating watching an episode in English, and then rewatching it in Chinese subtitles (to improve my Chinese skills), but since Haruka2 is coming so soon I guess I’ll just finish it all in English first.

Anyways, I need to rant about how fantastic this anime is.

First of all, the thematic presentation of the anime is very good. I admit, it’s not like, NHK-epic morals, but so far judging from the first 3 episodes, they are quite acceptable. (I mean, Shiro from Fate/stay night had morals that were just utterly stupid. Well I guess we’re kind of talking about something completely different here, but still. Good romance.)

Someone who would leave you or stop being your friend only because of your reputation… they are not true friends.

The pairing is very nice, and oh, I need to draw some parallels between Saku (from Summer09’s out-of-the-blue hit Sora no Manimani) and Yuuto-kun, the lead male in Nogizaka Haruka no Himitsu. They look similar, first of all, but most importantly their personalities are nearly identical (except Saku has the additional trait of being a bookworm). This type of lead male is one of my favorites… perhaps because it is an image of me (or the person I would like to be/become)?

I mean, Tomoya is another example of a good lead male, but I cannot at all relate to him. My dad is not a drunk bum. I do not ditch classes every other day, and I get straight As (except English H). And… I don’t have five-to-ten girls chasing after me.

The other reason I love this anime is Nogizaka Mika. She is so loli and moe, it hurts. Why did such a mean dad raise two super-moe daughters? Haha.

Wow, it’s been a while since I’ve had such an image-heavy post =D

You know, she kind of reminds me of a friend’s imouto, minus the um… moe/pretty part, and without the love ><

The maids are cool, too, and without a doubt, the characters that are going to be introduced in the near future are also going to be highly awesome.

Nogizaka Haruka no Himitsu, season two is going to be highly anticpated by me.

So many “season 2″s this season, eh? To Aru2, Inuyasha continuation (yeah I know huh)…

Um, no, we weren't eavesdropping.

Now that I think of it, Mika goes better with Yuuto-kun. 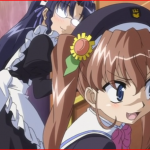 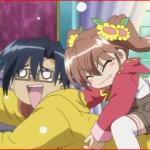 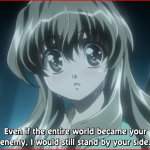 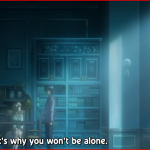 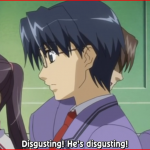 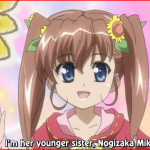 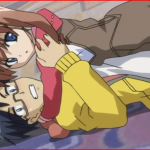 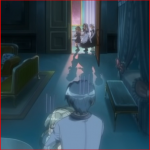