You are here: Home › Anime › Best+Worst

Best: Dance in the Vampire Bund

To Aru Kagaku no Railgun Episode 15 – What? No Touma in the new OP?

Bleh, it was a good song, but without Touma Railgun just isn’t right. The new ending song is better than ED1, though.

Y’know, all they have to do is add a half-second cameo of Touma and I’ll be satisfied. Teehee.

Omamori Himari Episode 02 — Himari is so… flirty. Usually these “weird angel/fairy/demon/Flame Haze” girls are dumber than that. Boring intro song. I could drown a fish

… FANSERVICE *eyes bleeding*. Please, no more lame swimsuit fanservice. The plot actually seemed interesting for a moment, and here they go ruining it with fanservice left, right, above, and below. I think the “romance” and the entire harem thing is annoying. It hurts to watch anime when 90% of the screentime is devoted to showing the females in sexy poses flirting and tripping over each other to get this one guy to like them.

I think the art of Japanese animation is being ruined by oversized breasts. A. [6/10]

God… lame… laame… Green-haired girl had some screenshottable moments though.

Sora no Woto Episode 01 — “Sorami Kanata” — what a cute name, at the very least. She’s cuter than Yui, too.

What the… what a fantastic intro sequence… I’m pleasantly amazed. Lol, she has perfect pitch. The Mio-copy is cuter than Mio, too. Or, at least, more mature.

I love how this anime has such a serious tone. Such a relief after watching Omamori Himari. No bouncing chests, no obnoxious flirting…

Ugh, I really really like the style (animation style AND story-telling style) of this anime. I’m not saying it’s perfect, and there are a lot of things I didn’t like about this ep that I didn’t bother saying, but this anime generally exceeded my expectations. They were pretty low expectations, I’ll admit (exact K-On! carbon copy or worse), but it’s great how this anime feels. It comes out with a rustic, medieval feel, combined with a more Nanoha-like (not K-On! like) character tone. This is mostly because K-On! is a comedy-focused yonkoma adaptation.

Most of what I thought about this episode was identical to Kurogane’s (better) review of it. The OP, I must say, is probably the best song I’ve heard so far this season. The first 5 minutes of this… amazing. Unfortunately… it devolved into a generic harem galgame anime quickly.

Imouto-chan (her name is Mana) is very cute… but something about the wheelchair screams “Nunnally clone!!” to me. Actually nevermind, she’s better than Nunnally (who I never really liked in the first place).

The animation is above-par, I am glad to say. Something about “wolf legend” screams Horo slash Spice and Wolf. The dad is a cool character. Mana’s personality is great, too.

This anime needs a Sunohara personality.

Why the hell is he so popular… “Hassaku matsuri”? Is it just me, or does that sound like Watanagashi (“Cotton Drifting Festival”) from Higurashi? In fact… this sounds so much like Higurashi so far, except Higurashi was better…

That ending… was epic. Also gave me a slight reminder of Shana and how people’s existences were erased and all. And wow, what a great ending song. S+. [9.5/10]

According to the preview… I hope nothing happens to imouto-san :< 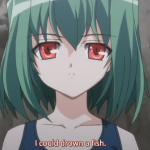 I could drown a fish. 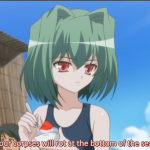 Your corpses will rot at the bottom of the sea. *nom shaved ice*